As you know billboarding is basically a plane with a texture on it that always facing the camera.

These are some examples of what we are going for.

This tutorial is going to be pretty straight-forward and easy to follow along you will learn how to make a billboard shader that not only keeps looking at the camera but also keeps its relative scaling intact.

We will be making 2 shaders here,

So let's get started with making the first one. As usual create a new Unlit shader and dive into the properties we need.

Don't get distracted by those shader attributes ( [xyz] ). These are really useful little statements that help us format our materail editor interface. I will be adding another tutorial which goes through all of them in detail. 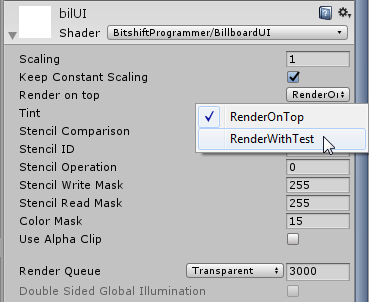 Now let's look at how these were defined in the CG PROGRAM.

You might have noticed that the _ZTest property doesn't show up here, That's because it goes in the sub-shader state value and while we are there we have to set some sub-shader tags as well.

Time for the Vertex Shader

We will go through each line in detail.

There are no modifications to the fragment shader.

To create a fully UI compatible shader we will use the 'Default-UI' shader that Unity provides us and make the same changes. You can get the Unity provided shaders HERE. Just select 'Built-in' shaders from the download drop-down for your desired Unity version.

The source code for both shaders can be found : HERE

That's it! Hope you learnt something. Support Bitshift Programmer by leaving a like on Bitshift Programmer Facebook Page and be updated as soon as there is a new blog post.
If you have any questions that you might have about shaders or Unity development in general don't be shy and leave a message on my facebook page or down in the comments.
For more Shader development tutorials, go : HERE
For Unity development tutorials, go : HERE